A Well Bred Dog Can Make You Look Good 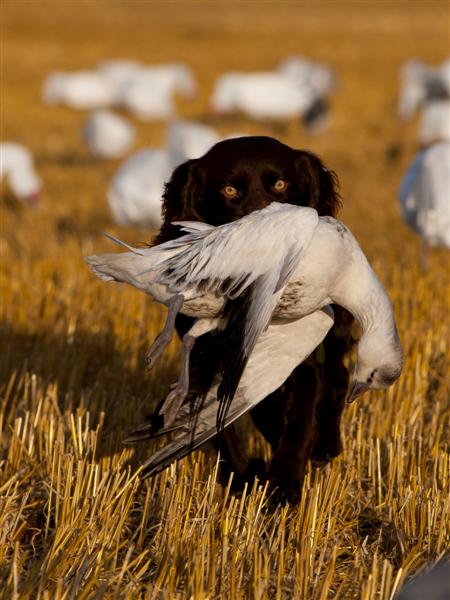 The long awaited text came; Pocotaligo’s Nama Karoo is 2013 INTERMEDIATE BOYKIN UPLAND NATIONAL CHAMPION. I was overjoyed to read the news. Thankfully, Kim Parkman was able to handle him as I was unable to attend. I’d like to thank judges Martin Deeley and Sue Meyers for awarding Karoo and the BSS for hosting the event.

His journey to this championship has been an interesting one for me, and likely for him as well.  Since childhood, I’ve owned several dogs but Karoo is truly the very first dog that I have trained.

Brian and I first met Kim in 2006 at a spaniel hunt test in Pennsylvania. At the time, Brian was experiencing training issues with his Welsh Springer. Angus spent some time training with Kim at Pocotaligo and later earned a Master Hunter title. A friendship was forged along with an introduction to the world of South Carolina’s state dog.

The Boykin Spaniel is a dynamic breed that impressed us from the start with their upland and retrieving abilities. Kim’s love of the breed is infectious and it was not long before I had one of my own. She just knew a Boykin would fit in our household and she was right.  Kim gifted Karoo to me – but not before making me promise to train and run him in field events and to have the requisite health tests performed at the appropriate time. Her dedication is obvious by just looking at Karoo’s pedigree and taking note of the number of BSS Champions and OFA certifications.

Most of Karoo’s basic obedience training happened while I stumbled around in the mornings getting ready for work. I would work on ‘here’, ‘sit’, ‘down’, and ‘heel’ while I tried desperately to wake up.

Evenings training sessions were added. In August 2010, I took him to a Fun Water Trial hosted by Mid-Atlantic Hunting Spaniel Club. He earned his first ribbon at 6 months of age, a 2nd place in the unsteady puppy stake. I was a beaming mom. This filled me with newfound confidence, inspired me to work harder, and started me on our journey to participate in the various field events available to us.

Karoo makes me look good as a handler. He is my accomplished ‘little man’ with Titles from AKC, UKC and BSS.

His hunting titles are Started Hunter Retriever (SHR) Title; JH, SH and MH Spaniel titles, two legs on his Master Hunter Advanced Spaniel title; two legs Junior Retriever Titles, a 2nd place in the Intermediate stake at the BSS National Upland in 2012, a JAM in the Novice stake at the Spring National in 2012 and now Intermediate National Upland Champion 2013! He earned his Championship Title in AKC in 2012 and was the Number 1 Boykin Spaniel in January 2013 with 20 points towards his Grand Championship and Six Best of Breeds in a row. Not only is he a great dog in the field, he is a good looking, healthy dog and is a gentleman in the house. What more could a girl ask for?