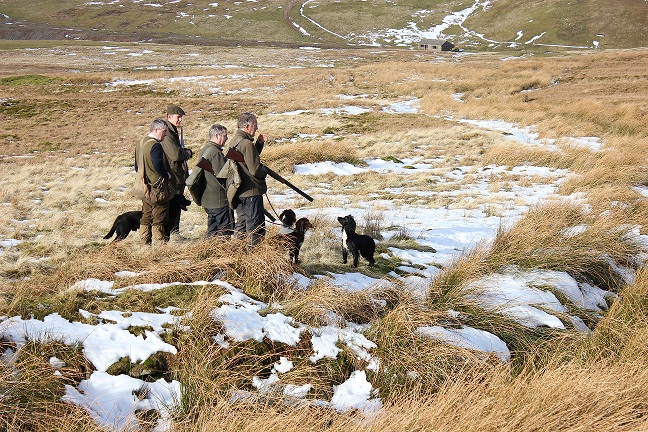 First, we need to know this; the English Hare is not a rabbit. Two separate animals although similar in diet, appearance and habitat. Hares are big creatures, up to 14 lbs. They are fast with speeds up to 35 miles an hour and quite cunning in their tactics. Hares have been the subject of English folklore; mystic, intriguing and characterized in literature, but they have also been regarded as sporting game for generations and a fine table fare for the noble and the commoner alike.

Although the population is said to be on the decline in the UK from some 4 million in the 1800s to around 800,000 today according to an article in Sporting Gun, the decline is most likely due to changes in farming practices and population encroachment, rather than hunting.

In February some of the larger estates in England host hare shoots for sport and to control the population of the animals. Nigel Carville, Wildrose UK partner, and I accepted an invitation from an estate in Norfolk to take in two days of driven hare shooting and picking up. Suffolk and Norfolk are highly developed regions for agriculture and have substantial hare populations. Without control, hares damage valuable crops and seedlings. Think about it, hare and rabbit exist in ideal circumstances on an estate that offers crop cultivation and game bird management. Excellent food sources, cover, plus the expertise of keepers to pressure predators that would prey on game birds and of course, the hare. What could be better for the population to thrive? Habitat and protection. Shooting provides the balance to prevent over population, as well as, the preservation of a historic sport… hare hunting.

Hare shoots on large estates are quite an orchestration. Thirty-five guns or more along with a few pickers are skillfully managed by Keepers and Underkeepers who know their beats and the best ways to push them. Long walk ups are created with gun lines stretching field to field ½ mile or more. These lines may progress from different directions connecting progressively designed to drive the hare forward ultimately to a central area. “Blankers” are long lines of walking guns (see page 187 of the Wildrose Way) quickly moving forward in unison under the constant direction of Keepers. The impressive gun lines extend ten times further than any I have witnessed in the Dakotas. The “Flankers” form the edges of the lines creating a U-shape to block the hares escape at the sides of the advancing line. Several walk ups may be taking place moving from different directions simultaneously converging on a single field which is being blocked by a stationary gun line. The advancing gun lines in perfect form would make any Napoleonic General envious.

Initially on the walkup a hare may be taken in front or behind the gun line. With a shot, the entire formation stops to allow the hare taken to be picked by either the gun making the shot or a retriever. Finally, all lines converge on a single field effectively creating a “boxed-in” effect.

You may see Labradors, Cockers, and Springers picking up fur on these days. Such dogs would normally be flushing and retrieving birds, but the hare experience is enjoyable for the dog and it’s a great opportunity to put additional game over them. The well-trained retriever picks the hare much faster than the shooter over the rough, often muddy ground and they are excellent at locating a wounded hare that escape into cover.

Surprisingly, during our two days we were on the shoot there were only three handlers afield covering three to four different gun lines. More dogs would have been beneficial as often gun lines stood idle as game was recovered by the shooter trudging across muddy plow to recover their hare and the occasional lost of a wounded runner did occur. A good retriever would make short work of these tasks.

Rabbit hunting in England is a bit different. Rabbits are ground dwellers. Labs become picking up dogs while the Spaniels do the heavy lifting as flushers. Cockers and Springers aggressively search cover to root out the rabbit holding tightly. Once out and on the run, it’s rough shooting at its best. With a quick glimpse of the quarry, the rabbit quickly goes to the ground unlike the hare who remains an above-ground runner.

It’s an enjoyable diversion to pick up rabbits with retrievers or flushing Spaniels. It only takes a bit of modification to our training.