The Life-Long Adventure of Wildrose Valentina 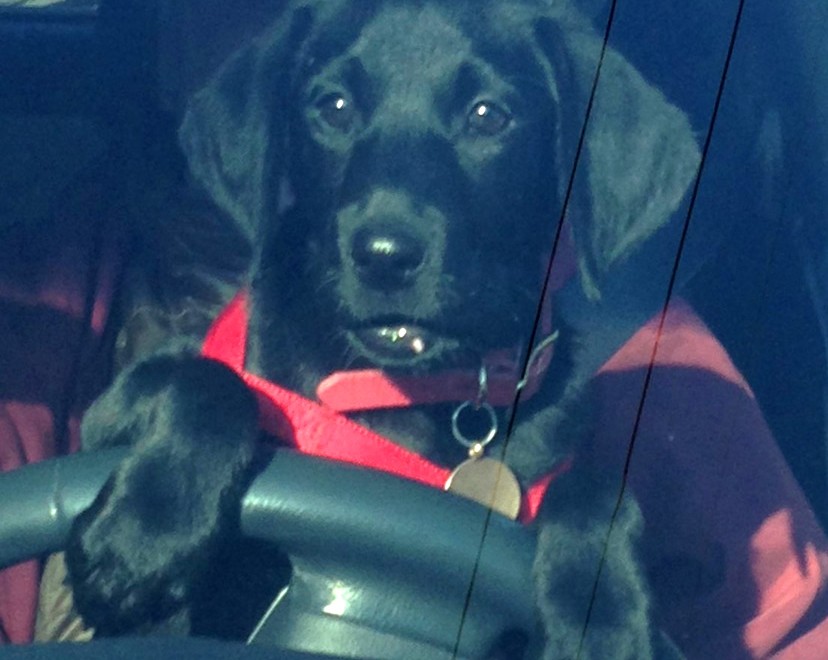 And so our Wildrose Adventure begins! It was puppy-picking day on January 18, 2013, and my husband, Mike, and I had the choice between two black females from the litter of Deke and Yellow Molly. I kneeled on the floor as the first pup walked away from me, seemingly uninterested. The second female scurried over, crawled up on me, got on her hind legs, and gave me the sweetest puppy-breath kiss. I looked at Mike and said, “What do you think?”

He replied, “It’s up to you, but she really seems to like you.” It was fate…Wildrose Valentina (Vivi) had chosen me! As I walked by each of the Wildrose staff members with Vivi cuddled in my arms, every one of them said, “Those eyes!” I had no clue what they meant, but now I do. Vivi still has those spectacularly focused eyes, especially when I throw her training bag over my shoulder.

I had the best of intentions for training Vivi to be the model dog that every Wildrose pup has the ability to become. I soon found out that although she was more than capable, I was sadly lacking in many ways to be the formidable handler I had envisioned. Many “life things” also got in the way. Not long after attending the Starting Your Dog the Wildrose Way group workshop in Spring 2013, I gave up on my dreams of achieving success as Vivi’s handler. I even gave up on basic obedience. I felt like a miserable failure. 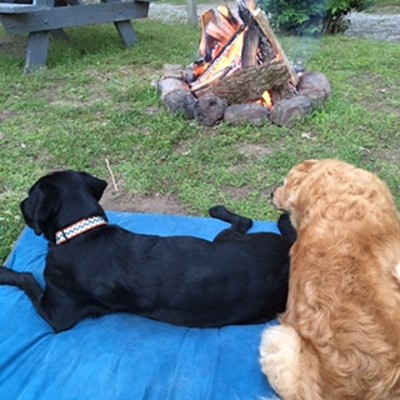 Fast-forward a year and a half later to November 2014. It was a few weeks before Vivi’s second birthday, and I had renewed energy to begin training her again. I told Mike that I would like to remove Vivi and myself from the family dynamic we had created with him and Claiborne, our rescue Golden Retriever, who joined us just three months before bringing Vivi home. I thought it would be the best way to reset the relationship between Vivi and me. We could then return home and apply our new skills. Mike agreed with the idea. I would transition to handler and she to trainee, as opposed to the blurred lines I had created.

Before I fully committed, I remembered that the Wildrose staff had encouraged owners to contact them with questions. Boy, did I have questions! I reached out to them, told them about my plan, and asked if they would be an educational resource for us. Luckily, they said yes. Armed with the Wildrose training methodology and the support of Wildrose trainers, Vivi and I headed off to a remote country location for one week to begin our endeavor. 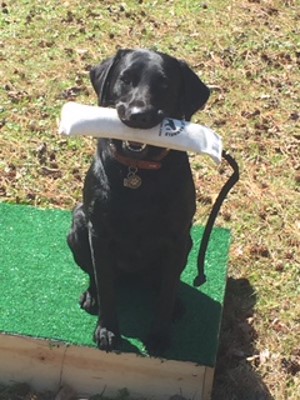 Vivi and I started with baby steps. More like infant steps. We began with the very basics: Wildrose Law #1 – Dogs are looking for a leader, Law #2 – If dogs can’t find a leader, they will attempt to become one, and Law #14 – A dog will not follow an unstable leader. I must say these three laws were the most difficult to establish because I had not instilled them from the beginning (Laws #3 and #4). Honestly, I almost gave up again – on Day 1! But with the encouragement of the trainers, my thought that Vivi deserved more from me, and sheer will and determination, I pressed on.

Day 2 went markedly better. We were so much more successful because I stopped expecting myself to be perfect. I was more patient, and I began applying Wildrose Law #5 – Make haste slowly (what???…Said to the woman who was taught to make things happen – and fast), and Wildrose Law #6 – Solve one problem at a time. We spent hours each day working together, and I spent hours each night making notes of training “A-Has” and accomplishments. By the end of the week, Vivi and I were a completely different team with well-defined roles. We had gone from an utter joke (i.e. remote stay = not even an inch between us, much less remote!) to a solid foundation of basic commands. Two pieces of advice that I really took to heart that week were, “a dog is always in training,” and “look for training

opportunities in your house and neighborhood.” With great pride, Vivi and I were heading back to our family.

As is always my first tendency, I arrived home in my black and white mode…rigid, with no room for adjustment. After all, they are LAWS, right? During that first week, Mike and Claiborne probably wished I had stayed in the country and sent Vivi back home on her own! Soon though, I gravitated toward the color and dance of our unique world, all the while reinforcing and expanding upon the skills Vivi and I had learned while we were away. Claiborne, who was an excellent training distraction and had virtually no training, began to mimic some of Vivi’s new and improved behaviors. I communicated this phenomenon to a Wildrose trainer, telling her I was actually having fun. She replied, “The pack mentality is amazing, especially if it is working in your favor!”

Vivi and I spent the next year greatly expanding our skills, eventually graduating to more advanced off-lead work in both urban and rural areas. We worked together every single day, sometimes simply reinforcing a behavior, sometimes adding a new lesson. I became so enthralled with Vivi’s drive to work and learn and astounded at my own personal growth that I decided it was time for another challenge. The time had come for Vivi and me to have another weeklong intensive. However, this time we needed a specific goal. I don’t hunt (yet) so I was at a loss for ideas. Again, I reached out to the Wildrose staff, and trainer Danielle Drewrey suggested the Wildrose Adventure Dog Certification Program. It completely fit our lifestyle, and it is a do-it-yourself training that can be completed at your leisure without having to attend a workshop 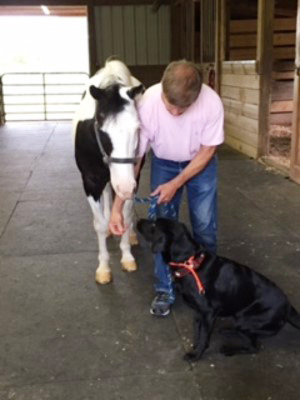 With Mike’s blessing, Vivi and I headed to the country again in November 2015. Using our certification manual as a guide, we began working on our first skill sets and corresponding merits. Building on what were now ingrained habits, Vivi and I began quickly accomplishing our merits. If I were having trouble with a particular merit, a Wildrose trainer would give me a useful training tip. Soon thereafter, we would check that merit off our list. By the end of that week, Vivi and I had completed all the merits for five of the skill sets. As a result, Vivi earned her very first award – her “Trail Rated” patch. Again, I couldn’t believe what we accomplished together. I was so proud of her!

Upon arriving home, I immediately registered for the Wildrose Adventure Dog Workshop that was going to be held at Wildrose Arkansas in May 2016. After our first embarrassing experience at a group workshop so long ago, I had been reluctant to attend another one. But with a renewed confidence in our relationship and training along with my more humble and forgiving approach, I saw it as an opportunity to share this experience with other people and their dogs. Vivi and I worked over the next six months to achieve the merits in additional skill sets in hopes of earning our next patch at the workshop. 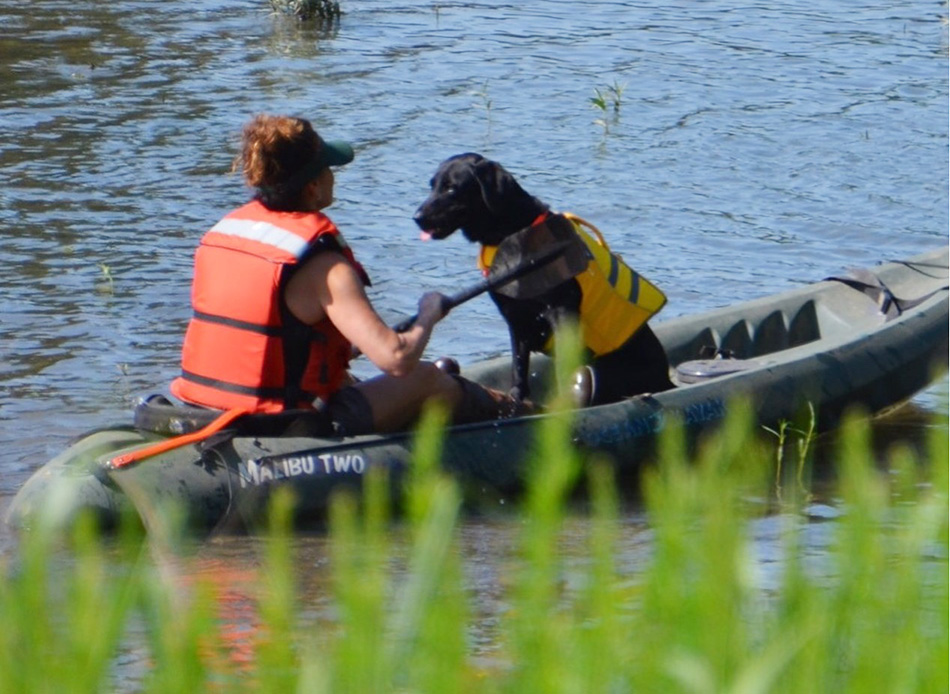 Enter May 20, 2016, Wildrose Arkansas. An exquisite piece of property situated in the middle of the Ozark Mountains, complete with the Little Buffalo River running through it. Cathy Stewart’s self-proclaimed “Happy Place.” Most of the trainers and attendees were strangers, but it didn’t take long for the dogs to break the ice! And thus, the camaraderie began.

For the next two days, we hiked, biked, fished, kayaked, hunted, and broke bread together (check out Instagram #WildroseExpedition2016 to share in some of the adventure). We also spent a lot of time talking and getting to know one another’s stories…truly invaluable. Last, we all parted that Sunday afternoon feeling a tremendous sense of accomplishment. Every dog earned a patch that weekend, and Vivi earned her second, “Adventure Dog Certified.”I left with even more admiration and love for her, which I didn’t think was possible. I feel certain that many of the other owners, if not all, feel the same way.

Participating in the Wildrose Adventure Dog Certification Program will strengthen your bond with your dog and help you both evolve in ways you cannot even imagine. Just say yes! Start your very own Adventure Dog team today!

Vivi and I are now working on skill sets to earn the final coveted badge – “Master Trekker.” We have begun with Equestrian, and so our adventure continues…