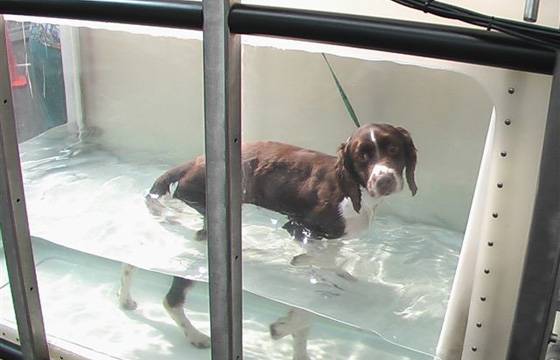 Jim O’Shea purchased his first Field Springer Spaniel in 1977. He’s been hunting for 27 years and field trialing and campaigning for 7. He and his wife Cindy have a kennel of 12 Spaniels—a combination of hunting, field trial, and family pets. Among those 12, none compares to Copper (whose full name is FC/Copper Creek Monty), a 5-year old English Springer Spaniel. Copper’s story, from his sudden rise to field champion to a near career-ending injury, is one that continues to unfold with surprising results.

Jim purchased Copper as a puppy with the sole intent of competing him. He worked with Copper two days a week field training him and preparing him for competition in the field trial circuit. Jim and Copper worked during the evenings and weekends and at just 10 months of age, Copper was ready for competition
“When I competed with Copper, I quickly realized that this dog was a lot more birdy,” recalls Jim. “His abilities were way beyond my skills to train him to his full potential. I knew it was time for Copper to be with a professional trainer.” Jim sent Copper to Brookwood Kennel in Glen Rock, Pennsylvania where he spent years training with Jeff Brooks.

Jeff entered Copper in the Professional All-Age Field Trial Competition where Copper became a field champion. At 2 years of age, Jeff began competing Copper in the pro ranks and took Copper to the U.S. Open Nationals where he finished Nationals. Says Jim, “It was truly amazing. Copper was moving at an accelerated pace and truly had a natural ability. In all of my years in this sport, I’ve never seen any dog rise to that level so quickly.”
But tragedy came to Copper almost as quickly as his achievements. In April 2003, Copper tore his right rear cruciate ligament during a competition. Jim was well aware of the prognosis that awaited his field champion dog. “I knew that every dog I had with this same kind of injury was never able to compete again at this high a level”, says Jim. “I was really struggling about what to do.”

Realizing the seriousness of Copper’s injury, Jim began talking with people in the Labrador Retriever circuit. There, he met Robert Motler. Jim recalls, “I remember saying, ‘Bob, I just don’t believe a dog can come back from this type of injury.’ I knew athletes, like those in the NFL, suffered from these types of injuries all the time. I figured if someone could fix my knee, I would want them to, and I would want them to do that for my dog.” It was then that Robert suggested Dr. John Sherman and VetHab Rehabilitation Office.

Robert was a friend and client of Dr. Sherman’s and well aware of the veterinarian’s work and accomplishments—not only with pre-conditioning or rehabilitating several National Retriever champions and finalists, but also with his advances in the area of canine rehabilitation. Says Jim, “Bob told me that there was only one guy in the country that could get Copper back to a competitive level and that was John Sherman.”

Having never heard of VetHab, Jim decided to call a fellow field trailer and veterinarian, Michael Moss from State College of Pennsylvania, for a second opinion. Jim talked to Dr. Moss at great length about TPLO (Tibial Plateau Leveling Osteotomy) Surgery and about Dr. Sherman. When Dr. Moss told Jim, “Jim, I do this for a living and you need to send this dog to Dr. Sherman”, that was the affirmation he needed to make Copper an appointment.

Copper was admitted into VetHab in May 2003 and spent close to 12 weeks there—entering into a progressive rehabilitative program. Immediately after surgery, Copper underwent ultrasound therapy, ice, and passive range of motion exercises. By week two, he was introduced to the underwater treadmill. A few weeks later, he began to work a combination of the underwater treadmill, aquatic therapy, and land exercises. By week four, Dr. Sherman began Copper on customized therapies including dancing, stairs stepping, and cone weaving. Almost 8 weeks after his admission, Copper was well enough to begin doing light field work in order to reacquaint him with what would be expected of him upon his return to competition. When Copper was returned to Jim in July, he could wear a 12-pound backpack and go on an inclined land treadmill for 30 minutes at 3mph.
Copper entered VetHab as a total in-patient. While most owners choose for a shorter stay and assume some rehabilitative responsibilities on their own, Jim entrusted Copper to Dr. Sherman and VetHab throughout his entire rehabilitation. The results were worth it. Says Jim, “When I got Copper back, not only was his injury repaired, but he was in the best shape of his life! I was simply amazed.”

Jim soon had Copper back into competition. Pro trainer, Jeff Brooks, competed with Copper in the Field Trial Circuit in the fall of 2003 and made it to the 5th and final series of the U.S. Open Nationals. Copper also qualified for the 2004 U.S. Open Championship.

“I honestly don’t even think about Copper’s injury anymore,” says Jim. “He’s never shown any sign of injury or lameness. Looking at him today, you’d never know that this was a dog whose competitive career was in jeopardy.”

Jim continues to be committed to an exercise regime for Copper. “I now regularly exercise him 3 times a week. I bought a treadmill and he works on that at the house. He also gets regular swimming trips at the pond to keep him physically fit and his body weight in check He really enjoys those trips!” Nothing is too good for this champion.